Review: The difference between different LASIK options in 2019

Patients often know that LASIK has changed considerably since the excimer laser was approved in 1995 but they aren’t sure exactly what has changed. The following post is designed to help clear up some confusion.

What is LASIK eye tracking?

Laser eye tracking was the first major advancement in LASIK surgery and it was an important one, because it is instrumental to the implementation of further technological advancements that followed it. Eye tracking essentially allows the laser to follow the eye. Many people don’t realize this but the original LASIK lasers actually didn’t have any of the advanced eye tracking technology that is available today. In fact, the older lasers didn’t have any eye tracking, period. That isn’t to say they were just firing randomly, but they essentially relied on having the patient fixate on a light and not move their eye during the surgery. If the patient moved their eye, the surgeon could stop the laser and remind them to fixate on the light. This may sound primitive, and to some extent it was, but we need to realize that the original LASIK lasers did not fire at as a high a rate as the ones we have today, meaning that the surgeon had more time to stop the laser if eye movement was detected. Also, the only LASIK ablation profile available on the first lasers was for myopia, or nearsightedness, which is a treatment that essentially flattens the central cornea. If this type of treatment is mildly decentered, it often doesn’t affect a patient’s vision substantially, especially if only a small fraction of the spots is off target. This is not the case for hyperopia or farsighted treatments where lasers are fired in a ring around the center of the visual axis instead of just firing in the center of the cornea. If the patient keeps moving their eye during a farsighted treatment without tracking, then the central zone, what we refer to as the optical zone, can become very distorted and uneven which will induce astigmatism and affect visual quality.

One thing I can tell you, and often reiterate to all of my patients, is that all modern lasers have eye tracking. If a patient moves their eye during the procedure the most common thing that occurs is that the laser will simply shift its firing pattern to the eye’s new location. However, if the patient moves their eye too far, then the laser will simply stop firing. If this occurs, I will stop and reassure the patient, let them find the fixation light again, and then the procedure can proceed normally. The laser utilized at Las Vegas Eye Institute, called the Visx S4 IR, not only has active eye tracking, it also has a technologically advanced feature called “iris registration”. This technology is linked to the preoperative testing machine at our practice called the Visx iDesign. The iDesign takes an infrared picture of your eye that is transferred to the laser prior to your procedure. Then when you are under the laser, I personally capture a new picture of your eye that is matched to your preoperative picture. Why do I do this? The reason is our eyes are known to rotate when we lie down on our back, this can be a negligible amount (say 1-2 degrees) but it can also be a more significant amount (such as 6-10 degrees) that will make astigmatism correction less accurate. The “iris registration” technology that we have at Las Vegas Eye Institute coupled with the high resolution “wavefront guided” LASIK ensures that the precise treatment we captured before the procedure is properly lined up when your eye rotates even a fraction of a degree when under the LASER, which leads to more optimal outcomes. 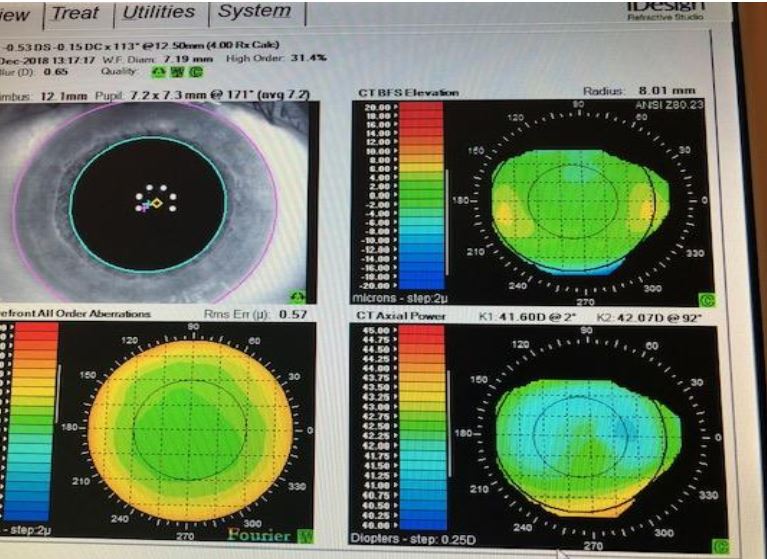 Wavefront is a key topic to understand when we are discussing modern LASIK because nearly all of the procedures done these days are either “wavefront guided” or “wavefront optimized”.  A wavefront is simply a light beam that is analyzed after it exits your eye. Our iDesign device specifically sends an infrared beam (that you cannot see) through your eye and then an advanced sensor picks up and analyzes the infrared beam when it exits your eye.  A wavefront is unique to your specific eye and when it is captured it shows us precisely how your eye tends to distort light. A nearsighted patient will have a completely opposite wavefront capture compared to that of a patient that is farsighted. Astigmatism is also captured up on a wavefront.  Of course, we don’t capture wavefronts merely to determine if a patient is nearsighted, farsighted, or has astigmatism. All of those things can be determined with a much more basic device called an autorefractor and then confirmed by a doctor or technician using the typical “which is better 1 or 2” device called a phoropter.  The reason we actually began to capture wavefronts was that in the early 2000s we were aiming to give patients “superhuman” vision by correcting things beyond what glasses were capable of correcting. Nearsightedness, farsightedness, and astigmatism (things that can be corrected with glasses) are referred to as “lower order aberrations.”  Wavefront goes beyond this to try to correct more subtle optical abnormalities called “higher order aberrations” which primarily include things called coma, trefoil, and spherical aberration.

OK, I think I understand what a wavefront is, now what is wavefront optimized LASIK?

Wavefront optimized LASIK is a great technology that was popularized by a laser originally called an Allegretto but is now utilized in the United States primarily on the Alcon Wavelight Platform.  I was trained using this technology during my fellowship at UCLA and have used it for many years with great results. However, its “wavefront” terminology doesn’t have anything to do with a wavefront capture device.  It only has to do with the way all treatment plans are created with the laser. The treatment plan is initially input into the laser in the form of nearsightedness or farsightedness with or without astigmatism. This treatment plan is actually written just like your glasses or contact lens prescription.  Wavefront optimized LASIK then takes into account the typical preexisting amount of “spherical aberration” in the general population of patients along with the amount of spherical aberration that LASIK normally induces. With Wavefront optimized LASIK, the laser is programmed to fire additional pulses to correct for this typical preexisting and induced spherical aberration which is also known as “wavefront error”.  Accounting for and correcting this wavefront error was a great advancement in LASIK technology. Patients get great outcomes and this is the reason I’ve used wavefront optimized LASIK technology on countless patients with both the Wavelight 400 and the newer Wavelight EX500 platform.

What is Wavefront guided LASIK?

Wavefront guided LASIK is LASIK that corrects “higher-order aberrations” along with “lower order aberrations”, i.e., nearsightedness, farsightedness, and astigmatism.  Wavefront guided LASIK can go a step beyond wavefront optimized LASIK because it is actually attempting to correct several other “higher-order aberrations” other than just spherical aberration that was discussed above.  Higher order aberrations known as coma and trefoil cannot be corrected using general population data because coma and trefoil by their very nature are unique to each individual patient’s eyes. So if you want to correct these higher order aberrations, it is necessary to test for them with a wavefront capture device on each patient you want to treat.  The original wavefront capture device (the device that was used to perform LASIK on my own eyes in 2010) was called the Visx Customvue. It was an amazing device at the time and consisted of something known as a Hartmann-Shack aberrometer that was able to detect things like trefoil, spherical aberration, and coma. The Customvue then took this data and created a treatment plan to correct these aberrations along with the lower order aberrations of nearsightedness, farsightedness, and astigmatism.  It was very advanced for its time and even captured an iris image that was transferred to the laser for “iris registration” as discussed above. There has since been a further advancement in technology with the iDesign 2.0 which is the device used to capture each patient’s individual data at Las Vegas Eye Institute. 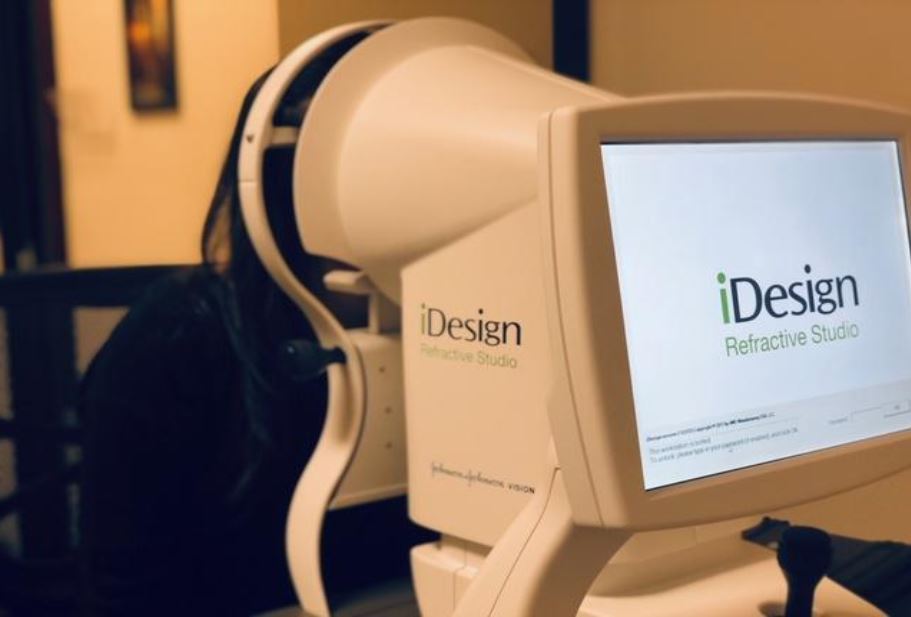 The image above is a patient seated for capture in the iDesign device.

What is new in wavefront guided LASIK?

The company Visx received FDA approval for the iDesign capture device in 2015.  This device then underwent further refinements that allowed it to integrate corneal topography into treatments with iDesign 2.0 that received FDA approval in 2018.  This amazing new device was created to replace the Customvue capture device. The Customvue was a great device (as I mentioned, it was used on my own eyes) but its Hartmann-Shack aberrometer had limited resolution.  This was just what you would expect for the time period it came out. If you think about the resolution of cell phones in the early 2000s it is nothing compared to your modern iPhone or Android phone. The Visx iDesign LASIK capture device is exactly the same way.  iDesign now has a high-resolution Hartmann-Shack sensor that is over 5 times that of Customvue. We used to get about 250 data points and now get 1250! This increased resolution has produced better results with iDesign than I’ve seen with any other platform since I began performing LASIK in 2010.  We often had people get 20/20 and usually even 20/17 vision with the Customvue and Wavelight platforms. Now with the iDesign, we have seen even patients achieve 20/13 vision. This technology along with all of the other state-of-the-art equipment we have at Las Vegas Eye Institute make me proud to say that there has never been a better time to consider getting LASIK. 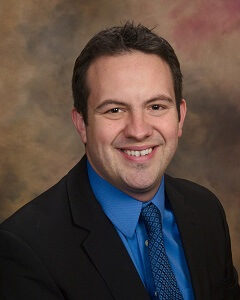 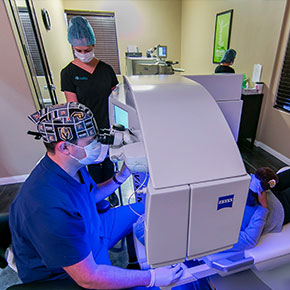 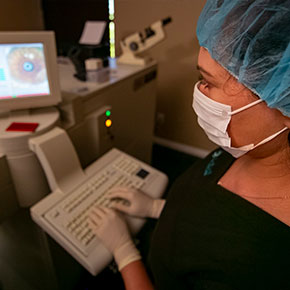